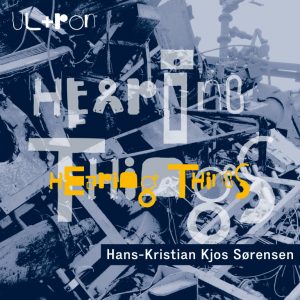 Hans-Kristian Kjos Sørensen´s latest album Hearing Things is simply a unique collection of classics and future classics in the repertoire of solo percussion. The album is centred around four unique composers – Per Nørgård from Denmark, the Norwegian Henrik Hellstenius, the French/Greek Iannis Xenakis and the American John Cage – as well as Sørensen´s own musical contemplations, where he tries to mirror his musical life against theirs. All four of them are highly spiritual and different musical personalities, who also see and relate to music differently.

This is something HKKS draws upon, in order to illustrate what he thinks about music as a pluralistic expression. Here is everything from the carefully calculated and powerful ritual represented through Xenakis, the timeless tranquillity that rises out of Isternia by Nørgård, the playful and theatrical Readings of Mr.G by Hellstenius and the intuitive and ambient ”In a Landscape” by John Cage.

Hearing Things is more than an album. It is the consequence of lost, found and lived life. The album is produced over a period of five years, a period full of sorrow and happiness, faith and doubt, deadlock and development. Music has been my therapy, and the recording and release of Hearing Things, the first release on Ultron Records, is something that I´m very proud of.

In the West Cork Chamber Music Festival in Bantry, Ireland, I had the pleasure of working with the poet and Nobel Prize recipient Seamus Heaney. The title of this album Hearing Things is a spin-off from Heaney´s collection of poetry Seeing Things (1991). In the same way as Heaney draws inspiration from the visions of the afterlife in Virgil and Dante in order to come to terms with the death of his father, the music on Hearing Things are musical reflections on the loss of my own father, Hans, who passed in August 2011.

Hearing Things is centred around four unique composers – Per Nørgård from Denmark, the Norwegian Henrik Hellstenius, the French/Greek Iannis Xenakis and the American John Cage – as well as my own musical contemplations, where I try to mirror my musical life against theirs. All four of them are highly spiritual and different musical personalities, who also see and relate to music differently. This is something I draw upon, in order to illustrate what I think about music as a pluralistic expression. Here is everything from the carefully calculated and powerful ritual represented through Xenakis, the timeless tranquillity that rises out of Isternia by Nørgård, the playful and theatrical Readings of Mr.G by Hellstenius and the intuitive and ambient ”In a Landscape” by John Cage.

The American composer Morton Feldman once said that to compose is to create a whole new instrument. This is something that I really can relate to, gathering new collections of metal, wood and skin instruments for each new piece I play. My own pieces on this album lean more towards the philosophy of Cage and the movement of Fluxus. By not having any given score or implemented structure beforehand, they are all played on the already existing set-ups and instruments given by the other composers on the album. Each new instrument is therefore my soundlink to the related composer. And by playing my own music on the same instruments, I develop a deeper relation to what the composers intended to communicate.

Call and the title track Hearing Things are both played on the cimbalom, which is also used on the pieces by Nørgård and Cage. This Hungarian national instrument crept seriously under my skin for the first time when I heard Michel Cerutti playing the cimbalom on Eclat by Pierre Boulez with Ensemble Intercontemporain during my years as a student in Paris. As a percussionist, I am fortunate to be able to exploit a whole range of possibilities instrumentally. And the cimbalom has been from that day in Paris an important part of my sound vocabulary. Call is played with mallets and Hearing Things is played with hands. The use of my voice on the title track is also a ”hello” to Hellstenius´s Readings of Mr.G.

Fly is kind of jazz-inspired, using the vibraphone as found on Readings of Mr.G

Far. is also played on the Mr.G-setup, giving me the possibility to explore new overtones and timbres between the tempered vibraphone and the non-tempered tuned gongs. And by using drums and thumb-rolls on the bass-drum, I want to create a feeling of profundity. The title refers both to my father (Norwegian: far) and as being distant to the world and near to yourself.
All my own pieces seem to be reflections on my own personal and musical background, painted with the musical brush that this period in my life has given to me.

Isternia by Per Nørgård was originally written for cimbalom in 1979 for the Danish percussionist and cimbalist Suzanne Ibstrup. Unfortunately, she died before she was able to perform it, and the piece was later transcribed for other instruments. When I showed interest in the original handwritten score, Per Nørgård asked me to edit it and to release it once more on Edition Wilhelm Hansen. The music of Nørgård is closely related to life and nature. It has always made a strong impact on me, and it was therefore not possible to reject such an offer from him. I premiered Isternia at The Norwegian Academy of Music February 2010, thirty years after it was written, in Nørgårds presence, and it was later published in 2013. Nørgård has also dedicated Isternia to me.

Readings of Mr.G by Henrik Hellstenius was commissioned by me as a concerto for solo percussion and chamber orchestra. It was premiered with the Norwegian Chamber Orchestra, conducted by HK Gruber, in 2003 and it has later been performed many times all over Scandinavia. In Readings of Mr.G, the soloist is required to combine virtuoso parts in both tuned percussion (vibraphone, tuned gongs, crotales), various drums, wood and handcrafted metal, as well as to recite text and sing, giving life to the voices of the philosopher Mr. Georges Ivanovitch Gurdjieff (Mr.G) and his pupil Peter Ospensky, who also wrote this text. Gurdjieff talks about ”man is a machine”, ”man is asleep”, ”he must wake up”. He claims that man is acting solely on external impulses and is not capable to create himself. He urges us to get real and to take control. The consequence for the performer is a highly virtuoso part that brings out everything that he has to offer.
At a later stage, I got the idea that the solo part would fit nicely as the core of a solo sonata for percussion. Henrik Hellstenius was immediately thrilled about this, extended and completed the solo percussion part with voices from the orchestra and voila: Readings of Mr.G as a solo sonata by Hellstenius! Though really, it is actually creating a whole new dimension. It is genuinely fascinating to experience a concerto, that you know so well and have played by heart, turn into a whole new musical expression in this solo version. It is, in fact, a genuine new piece of music!

Iannis Xenakis wrote Psappha in 1975 for my late teacher, Sylvio Gualda in Versailles, and it was premiered by him in 1976. Since then it quickly became arguably the classic piece for solo-percussion in our time. After having spent eight months of digesting 2396 segments in a highly graphic notated score, working through three different percussion set-ups, I finally was able to perform it at The Banff Centre in Canada. Psappha is written for three different groups of wood and/or skin and three different groups of metal. The composer leaves it open to the performer to develop his/her own instruments and selections of timbre. For this recording, I therefore invited the unique musician and composer Martin Horntveth to join me on live electronics. We basically used two different microphone set-ups – one for my acoustic instruments and one consisting of contacts to work as trigger signals for Martin´s boxes and laptop. All of his sounds are directly generated via my acoustic signals and thus giving extra musical dimensions and depth to what is already there, which gives a range of possibilities for me as a musician. If you listen to it in 5:1 surround, Psappha begins with the acoustic sounds appearing to come from in front of the listener and then later the electronics appear to be emerging from behind the listener. As the piece moves forward the electronics merge into the acoustic percussion set-up, creating a new level of drama and ecstasy!

John Cage wrote In a Landscape for solo piano in 1948 and it is historically also played by the harp. Written for the dancer Louise Lippold, the piece follows the rhythmic pattern of the choreography and is linear in its form. For me, it works perfectly for a five-octave cimbalom. By using the pedal held down as written, it gives a resonance which is similar to the inside of a piano, combined with the finger attacks like that found on a harp. The blend of these two elements leads to a dreamy and ”Satiesque” meditative atmosphere which suspends time.