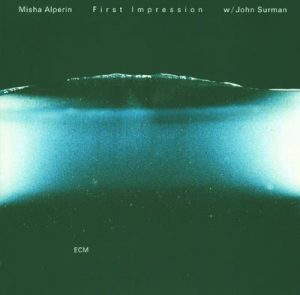 Off-the-cuff interplay and melodic creativity are uppermost in this spontaneously-organised session in which the great British reedman John Surman meets Ukrainian pianist Misha Alperin for the first time. Based now in Oslo, Alperin has become a central figure on the Scandinavian scene and assembled an impressive ‘Nordic’ jazz band.

A fresh-sounding “Nordic” production for the New Year, featuring the first recorded encounter between Mikhail “Misha” Alperin, the Ukrainian pianist and composer who has become a central figure on the Norwegian scene since moving to Oslo in 1993, and John Surman, the great British reedman who has for many years commuted between the Norway’s capital and his Kentish home. Some of Surman’s most inspired moments as an improviser have come on spontaneously scheduled ECM sessions and First Impression ranks on this level with 1992’s November, where he guested with the John Abercrombie Trio, and with Mick Goodrick’s 1978 album In Pas(s)ing, still a model of off-the-cuff interplay and melodic creativity.

Surman, brought into the project by producer Manfred Eicher as a late substitute for Norwegian saxophonist Tore Brunborg, fairly flies through Alperin’s charts, playing the angular themes with such breezy assurance that one feels they must have been written for him. But it should be borne in mind that since arriving in Oslo Alperin has concerned himself with the imaginative reconstruction of an idiom to which Surman was a key contributor. With his last release, the critically-acclaimed North Story, Misha Alperin consciously set out to reinterpret the emotional tone and the “feeling of discovery” of Northern European jazz of the 1970s. ECM’s many productions had helped to define the new jazz of that era and Surman had unquestionably been one of its important voices, and not only on specifically “Scandinavian” recordings, such as those with long-term partner Karin Krog. From a historical perspective, then, there is a certain inevitability about the Alperin/Surman alliance.

Their special compatibility is also rooted, perhaps, in a common feeling for transformed folk forms. Moldavian melodies have long been an important source of inspiration for Alperin, and Surman’s affection for traditional British music is well-known. Factor in the special understanding that Surman and drummer Jon Christensen share, honed in the Miroslav Vitous Group of 1979 to 1982 and confirmed in countless ad hoc groupings since then, and the saxophonist’s affinity for this music and these musicians become less surprising.

Misha Alperin was born in Ukraine in 1956 and grew up in rural Bessarabia in the eastern part of Moldavia. He played with folk musicians while also studying composition and piano, and was subsequently a member of the Moldavian Jazz Ensemble of saxophonist/violinist Semjon Shirman. Alperin came late to jazz. He did not even hear recordings of Charlie Parker and Coltrane until he was 24. Overwhelmed by the strength of the music, he transcribed solos by the great hornmen and endeavoured to adapt them for the keyboard. He had played the piano music of Rachmaninoff and Shostakovich extensively, but nonetheless found the transition to a predominantly improvised mode “very difficult.” The first jazz pianists who caught his attention – all of them introduced by Shirman – were Art Tatum, Red Garland, Thelonious Monk, Lennie Tristano and Keith Jarrett.

Alperin moved to Moscow in 1983 where he met his most important musical associate, the French horn and flugelhorn virtuoso Arkady Shilkloper – then working with the Moscow Symphony Orchestra, the orchestra of the Bolshoi Theatre and the Bolshoi Brass Quintet – and began, experimentally, to cross-reference elements of the Russian and Romanian folks musics of the Moldavian region with his subjective understanding of the jazz tradition. “It was a big challenge to see if I could contribute to Misha’s concept,” says Shilkloper, “because the Moldavian music he had adapted is noted for the demands it makes on horn players.” Alperin had fewer doubts, convinced of the universality of the music. As he explained it later to Isak Rogde: “All folk music belongs to the same family, and I wish to break down barriers and borders not only geographically, but also historically – the borders between epochs. If you listen closely to Moldavian folk music, you come across structures that are well-known all through the Eastern world, And, you know, sometimes when I listen to, say, Garbarek’s music, even his joik, I could swear I recognize it as Moldavian.” After intensive rehearsals for many months, the Alperin/Shilkloper duo began playing every week at Moscow’s Blueberry Jazz Club, gradually building an audience.

Their first European tour brought the duo to Oslo, where they risked a visit to the Rainbow Studio and taped a demo with Jan Erik Kongshaug. Soon afterwards, Manfred Eicher tracked them down in Zürich and proposed the recording that became Wave of Sorrow in 1989, attracting the interest of the European critics. “Alperin’s compositions are impossible to classify in terms of genre,” Thomas Rothschild wrote in the Frankfurter Rundschau. “They are for the most part aphoristic pieces, indebted as much to Bartók, Schnittke or Kurtág as to Jarrett or Corea. They are unique indeed, and must be heard.” And indeed they have been heard, often as performed by the Moscow Art Trio, Alperin and Shilkloper’s group with folk singer/clarinettist Sergey Starostin, meanwhile a popular fixture on the concert and festival circuit.

North Story marked the first occasion on which Alperin had been backed by a rhythm section in the jazz sense, a strong rhythm section which returns for First Impression. On drums the redoubtable Jon Christensen, who has played on more than 50 ECM albums thus far and has yet to repeat himself, a drummer whose fluidity and flexibility continue to astonish. On bass, Terje Gewelt, whose swelling discography includes work alongside Michael Shrieve, Mark Isham, Dave Liebman, Bendik Hofseth, Nils Petter Molvær, Bugge Wesseltoft, Ahmad Mansour and others.

Guesting on “Movement” is percussionist Hans-Kristian Kjos Sørensen. Kjos Sørensen made a strong showing last year on his ECM debut with Christian Wallumrød, No Birch. Currently regarded as the foremost classical percussionist in Norway, Kjos Sørensen’s solo recital repertoire includes pieces by Xenakis, Stockhausen, Lachenmann, Donatoni and many others. He plays regularly with the Bergen Philharmonic, the Stavanger Symphony and the Norwegian Radio Orchestra, and is active also as a free improviser.
©ECM