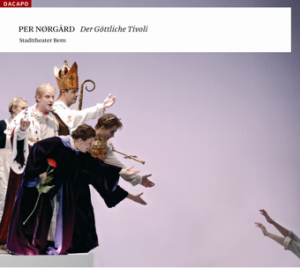 The composer Per Nørgård has the last five decades virtually changed the music written for percussion, as well as how percussionists see, hear and play their own instruments.  Being percussion soloist in his opera The Circus Divine and get to work with him directly over a period of 3 years has been a game changer for me. And offered me with a whole new dimension of being on stage as a performer.
– HKKS

Per Nørgård composed the I Ching for solo percussion at the same time as he worked on his opera. Thus, the epilogue on Der göttliche Tivoli is the whole fourth movement of I Ching; a 15-minute tour-de-force on drums, vibraphone and gong. And this is even before the actual opera has started! 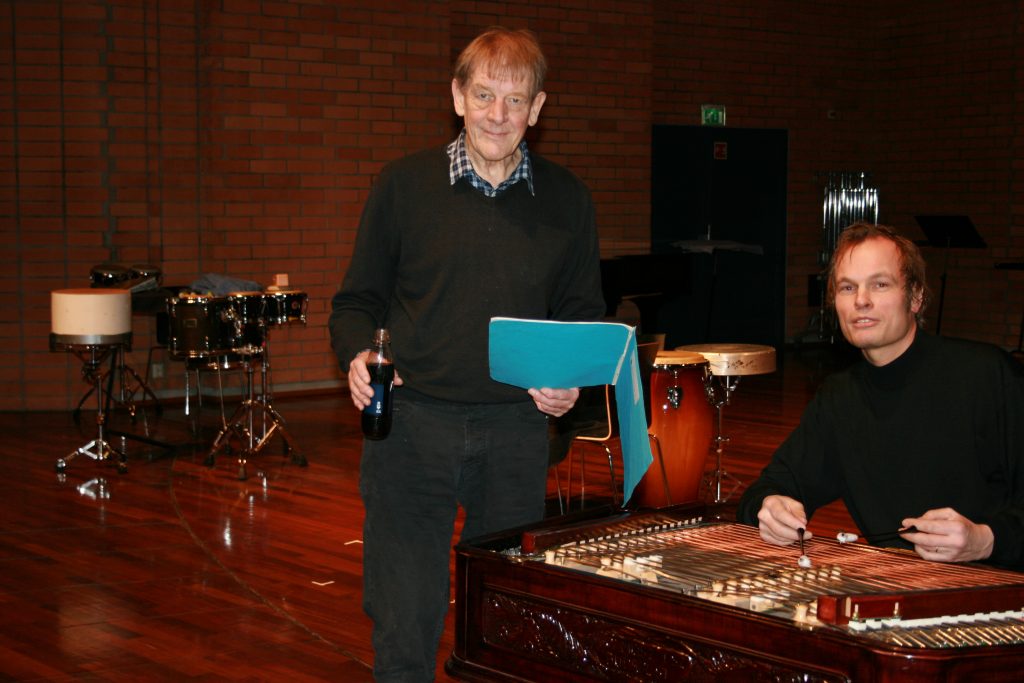 
[ssba-buttons] Background
Poem. The book of life is the greatest book: you do not close and open it at your own choice. The most beautiful thing in it you do not read twice, but the page of misfortune appears often enough. You wish for the page on which our love stood, and then you stand with the page of death in your hand.

In 1921 Walter Morgenthaler, who worked between 1908 and 1919 as a doctor in the asylum at Waldau near Bern, published his much-discussed book about Wölfli. In the book he describes the patient's life and artistic work from the point of view of the doctor. In revolutionary fashion, like Hans Prinzhorn a year later, he ascribed an aesthetic dimension to the productions of the mental patient.

His father was a stone mason, and, at least if we can trust the information from the patient, was an intelligent man; and when he was sober also a good worker; but besides this a decided drinker who drank up his wages in the most notorious schnapps and fornication dives and left his family to suffer want. Gradually he became more and more dissipated, finally turning to crime and ending up in prison. In 1875 he is said to have come back - apparently with the help of the police - to his native parish Schangnau, where he soon afterwards died in a state of delirium.

His mother is said to have been a washerwoman. During an interview in 1895, the patient said that she led an immoral life. Nevertheless, he seems to have remained attached to her.

Adolf was born on 29th February 1864. Until he was eight years old he lived with his parents in Bern. In 1872, by his own account, he and his mother were sent with the help of the police to her native parish, the remote village of Schangnau in Emmental. His mother is reported to have been ill already on her arrival, and she died a few months later. Shortly after their arrival, the boy had been taken from his mother, and he only heard of her death by chance some months later.

One is reminded of Jeremias Gotthelf when he tells us how, at a ‘Verdinggemeinde', he was taken from his mother and given to a farmer; how at the age of eight he had to tend goats in the summer and in the winter had to do hard work in the forest; how he was often hungry, witnessed schnapps feasts and was himself seduced into drinking spirits; how as punishment for small misdemeanours and accidents he was abused, caned and kicked, so that he was unable to go to school, etc.

From 1880 on he was a farm hand. Between 1881 and 1882 he worked for a farmer in Zäziwil, where the poor little farm lad, hardly eighteen, fell head over heels in love with a neighbour's daughter. When the girl's parents discovered the relationship, they forbade her to see him. This renunciation must have pained Wölfli greatly: I brooded, even became melancholy, and did not know what to do. The same evening I rolled around in the snow out of pure lover's grief and lamented the happiness I had so evilly been denied.

He travelled to Bern, where he was employed in very hard work by a farmer. But soon he was unable to bear it there either, and he now embarked on a chequered career.

In that spring (1890) he encountered something quite new to him, something he was apparently unable to even to explain to himself: one Sunday as he was wandering aimlessly in Bremgarten, he came across a 14-year-old girl deep in the forest. At all events, Wölfli was suddenly seized by rash thoughts, approached the child, and caught her by the arm after a brief introduction, such that she began to weep. Three men and an old spinster came up and prevented anything happening. On 12th May 1895, Wölfli committed a new offence, stealing into a house in the town and trying to engage in some immorality with a little girl of only three and a half. He was surprised by the parents and handed over to the police.

On 3rd June 1895, he was committed by warrant to the asylum Waldau for a mental examination. The declaration of the experts, which was made on 8th October 1895, concluded that Wölfli was mentally ill and of unsound mind, as well as a danger to public safety, whereupon the process was interrupted and the case files were sent to the responsible official in the cantonal government. On 23rd October he decided that Wölfli was to be placed in an asylum and kept there until he was \\mentally cured and no longer dangerous to public safety. [Wölfli remained there until his death in 1930 - ed.]

For the first five years in Waldau, the symptoms of his illness became more and more pronounced. In the spring of 1899 we read for the first time that for a period he has been busily sawing firewood and in November that year that he passes the time drawing. In the second period, it is recorded again and again how he draws, writes, composes etc. enthusiastically. For years his state of mind then alternates between irritation, innumerable hallucinations, threatening behaviour, scolding and banging about and serious acts of violence. For long periods he remains calm when he has enough material to draw and is not disturbed by others.

Third period: On 29th September 1917 he was transferred to solitary confinement beside the guard room on the second floor. He had no concern but to ensure that his huge heaps of papers and drawings were transferred undamaged to his new place of residence. And there he settled down again.

But he still hallucinates a great deal. Almost every night he has to scold his voices for a while.

Recorded in 1921
Walter Morgenthaler
PER NØRGÅRD
The long succession of awards that Per Nørgård (b. 1932) has received for his compositions shows how important he is considered to modern music - and not only Danish music. His abundant output of symphonic and chamber music as well as his five operas to date shed their radiance far beyond the north of Europe and out into the world.

Per Nørgård was born on 13th July 1932 in Gentofte in Greater Copenhagen. At a very early stage his teacher in composition, the Danish symphonist Vagn Holmboe, equipped him with the principle of musical ‘metamorphosis', which he saw could be developed further during his study of among other things the works of Sibelius. In 1956 he spent a year studying in Paris with Nadia Boulanger. From 1958 he was a teacher himself, first at the Carl Nielsen Academy of Music in Odense, later at the Royal Danish Academy of Music in Copenhagen, and finally at the Royal Academy of Music in Århus, where he established an important centre for contemporary music. For many young Danish composers he became a mentor who was to influence their whole professional life. Between 1975 and 1980 he went on several journeys to Indonesia, where he immersed himself in Balinese gamelan music. It was first and foremost the percussion instruments that interested him, as in the gengs and chalungs - in versions specially made in Bali for Per Nørgård - used in The Divine Circus.

From his student years until the years around 1980 Nørgård's career as a composer can be seen as a continuous development where the aim is to create a closed harmonic totality. In purely technical terms, the infinity series, which he discovered in 1959, plays an important role. This is a principle for generating pitches which uses self-identical units to create a melodic-harmonic sound universe. In this context, the composer himself speaks of the musical weaving of an "infinity" tapestry. At the rhythmic level, he based his compositions on organic organizational forms, especially the Golden Section. For the musical theatre, he created three operas in this period: The Labyrinth (1963/67), Gilgamesh (1971/72) and Siddharta (1974-1979/1989).

In 1979 Per Nørgård visited an exhibition with works by Adolf Wölfli, and this led to a crucial turning-point in his way of composing. Inspired by Wölfli's rule-free art Nørgård departed from many of the organizational forms he had cultivated hitherto, turning towards a more subjective, spontaneous and at the same time less bright, harmonious way of writing: \\The encounter with Wölfli's art (and his life!) concluded a harmonic decade (1970-1980), in which my gaze had been directed towards a cosmological-harmonic totality that was strongly based on the discovery of the ‘infinity series' (1959). After immersing myself in the multidimensional universe of the infinity series or the infinity tapestry, I experienced the encounter with Wölfli's chaotic art as a mental dive into a different, dark world - eerie, unpredictable, but fascinating and above all highly specific. That is a 180-degree turn away from the preceding ‘light-period'! (Per Nørgård in February 2007).

Among the works written in connection with Wölfli was the choral work "Wie ein Kind" (1980), the Fourth Symphony with the subtitle Indischer Roosen-Garten - Chineesischer Hexensee (1981) and the opera The Divine Circus (1982). Around the time of the opera the piece I Ching for solo percussion also arose, and in certain passages, it coincides with the opera; its fourth movement is identical with the virtuoso percussion prelude. In the opera percussion instruments generally play a leading role: besides a synthesizer and an electronically amplified cello the ‘orchestral' ensemble requires six percussionists. After the world premiere in Århus in 1983, the opera was performed in among other places Edin-burgh and St. Gall. The German premiere took place in Lübeck in 2007, and this production was also shown in Bern.

The operatic rendition of Wölffi´s life is mind-boggling in its musicality...a difficult yet intriguing adventure in the life of a troubled artist and the curious composer who was moved by his artistry.
Tiina Kiik, The Whole Notes