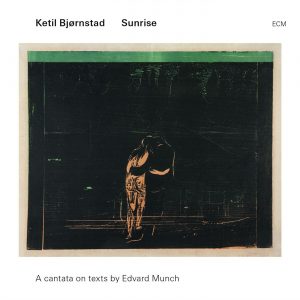 Ketil Bjørnstad previously explored the life of Edvard Munch in his acclaimed 1993 novel Historien om Edvard Munch. When invited to compose music for choir in 2011, his thoughts turned once again to Munch and to the writings, still not widely known, of the proto-expressionist Norwegian painter. With these as his guide, Bjørnstad shaped Soloppgang (Eng: Sunrise) subtitled “A cantata on texts by Edvard Munch”. In his liner notes, Bjørnstad observes that “the texts written by Munch can be compared to his paintings in their power and intensity. He wanted to be a writer as well as a painter… texts from different periods in Munch’s life have been used in Sunrise. They all portray existentialist dilemmas: surviving or being destroyed, believing or observing.”
The changing moods of the writings inspire very different musical settings. Sunrise was released first in Norway in November 2013 – in connection with the 150th anniversary of Munch’s birth – and it was met with the most positive critical receptions.

Ketil Bjørnstad previously explored the life of Edvard Munch in his acclaimed 1993 novel Historien om Edvard Munch. In the same period, he also collaborated with singer Kari Bremnes on the album Løsrivelse, based on Munch texts. When invited to compose music for choir in 2011, Bjørnstad’s thoughts turned once again to Munch and to the writings, still not widely known, of the proto-Expressionist Norwegian painter. With these as his guide, Bjørnstad shaped Soloppgang (“Sunrise”) subtitled “A cantata on texts by Edvard Munch”.

In his liner notes, Bjørnstad observes that “the texts written by Munch can be compared to his paintings in their power and intensity. Texts from different periods in Munch’s life have been used in Sunrise. Munch always wrote something about his motifs before painting them. These were often short prose texts describing the subject matter he envisioned for the picture. His prose style was heavily influenced by August Strindberg and the Norwegian anarchist and writer Hans Jæger. He produced modern, often crudely crafted pieces of writing that had a sketch-like quality, but that he would repeatedly re-edit. He worked on several ideas for novels and wrote a number of short stories. They all portray existentialist dilemmas: surviving or being destroyed, believing or observing.”

The changing moods of the writings inspire very different musical settings. Kari Bremnes appears as the solo vocalist in several pieces. Eight of the sections of the cantata include the Oslo Chamber Choir as well as Ketil’s hand-picked group of players, some of them familiar to ECM listeners. (Bjørn Kjellemyr, who also played on Bjørnstad’s first ECM album Water Stories, has been bassist for the very different groups of Terje Rypdal and Rolf Lislevand, while percussionist Hans-Kristian Kjos Sørensen can be heard on recordings with Christian Wallumrød and Misha Alperin.)

Bjørnstad has indeed been a prolific creator, with more than 50 albums and 40 books to his name. The Oslo-born pianist, composer, improviser, novelist, poet and essayist, described by The Guardian as “a cultural prodigy”, has been an ECM recording artist since 1993 when his Water Stories album was issued. Other ECM recordings include The Sea, The River, The Sea II, Epigraphs, Life In Leipzig, The Light – Songs of Love and Fear, Remembrance, Night Song, Vinding’s Music – Songs From The Alder Thicket, and most recently La notte, his Antonioni-inspired project recorded live at the Molde Jazz Festival. Further recordings with Ketil Bjørnstad are in preparation.

Kari Bremnes was born in Svolvær, and studied at the University of Oslo. She worked as a journalist before dedicating herself fully to music. She has released fifteen albums of her own, as well as a number of collaborative recordings. Last year Kari Bremnes joined Bjornstad for performances of Munch songs at London’s Purcell Room, prompting Jazz Journal to write, “Bremnes’ lucid, soulfully pitched phrasing delivered the direct and often very moving lyrics of love and death, longing, belonging and loss with consummate poetic understanding – and, where needed, controlled drama.”

The Oslo Chamber Choir was founded in 1984 by Grete Pedersen. The choir is noted for its quality, flexibility and an ability to combine and switch between different genres, such as classical, Nordic contemporary music and folk music. Its innovative exploration of the Norwegian song tradition has earned the choir recognition at home and abroad.
©ECM


Press reactions
‘Sunrise’ depicts Munch’s dark struggle with and against the forces of life, eventually finding resolution in the image of the sunrise. Like his paintings, Munch’s imagery is often powerful and visceral. Bjørnstad, however, steers clear of providing a musical analogue to Munch’s texts. His style is rooted in jazz-style modal and harmonic inflexions, reminiscent at times of ECM stablemates Keith Jarrett, Pat Metheny and Lyle Mays. […] Bjørnstad’s style is expressive rather than expressionist; lyrical, reflective, sometimes beautifully so, such as in the songs that feature vocalist Kari Bremnes (‘The Mother’ and ‘Open Window’). There are also some very telling contributions from cellist Aage Kvalbein and dynamic double bassist Bjørn Kjellemyr, as well as the composer himself on piano. The Oslo Chamber Choir sing with an intelligence and understanding of both the words and the music.
Pwyll ap Siôn, Gramophone

As a pianist/composer who is also a novelist and biographer of Munch, Bjornstad is the perfect interpreter of this legacy and the 19 separate sections subtly move through myriad Munchian moods before ending with the transfiguring light of the closing ‘Sunrise’.
Phil Johnson, Independent On Sunday

A work that manages to move naturally between choral pieces, chamber intermezzi, free-ish jazz interludes, folk-jazz waltzes and something that might best be described as Astrud Gilberto on a Norwegian odyssey. It’s based on texts by Norwegian artist Edvard Munch, of The Scream fame, which Bjørnstad has set variously for the wonderfully guttural solo voice of Kari Bremnes, the Oslo Chamber Choir and a group of jazz and chamber musicians including the marvellous Aage Kvalbein, whose cello sings with soulful sadness and passion. A work of considerate scope, it lacks nothing in drama but, equally, isn’t afraid to hit you with a damned catchy tune.
Rob Adams, Sunday Herald