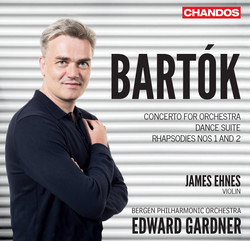 Among the rare works by Bartók for a full orchestra, the Dance Suite “immediately” precedes the Concerto for Orchestra, albeit by more than two decades… As with the Concerto, this was commissioned by Budapest City Hall for the 50th anniversary in 1923 of the unification of Buda, on the north bank of the Danube, with Pest, on the south. As so often with Bartók, this is “imaginary folk music”: the themes are assembled on a formal melodic and rhythmic base, made up from a stock of popular airs from Hungarian villages, but also from Romanian, Slovak and North African Arab sources. Unlike the two major orchestral works recorded here – the Concerto for Orchestra and the Dance Suite – the two rhapsodies for violin and orchestra from 1928 show us a Bartók who is returning to the “export” style of Eastern Europe, which he had inherited – like Brahms and Liszt before him – from Viennese café musicians: that is, from musicians much closer to the Romany accents than to the reality of Magyar folk music. The First Rhapsody is tinted with local colour thanks to the addition of a cimbalom in the orchestra, his one and only use of this instrument. As for the score for the Concerto for Orchestra – the most major work that he would produce in the last five years of his life in the USA, where he was a sick and demoralised refugee – it was commissioned by Serge Koussevitzky. Bartók began the work in August 1943 and completed it in eight weeks, a remarkably short period which proves that the was genuinely reinvigorated by the work: “Perhaps it’s thanks to this improvement that I was able to write the work Koussevitzky commissioned – or vice versa,” he wrote. The work was performed in December 1944 by the Boston Symphony Orchestra, and Bartók then altered the final portion, which became a little longer. On solo violin for the Rhapsodies, we have James Ehnes, while Norway’s Bergen Orchestra is conducted with admirable clarity by Edward Gardner. © MT / Qobuz